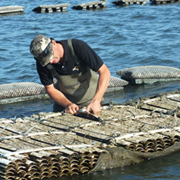 During spawning, adult females release up to 20 million eggs into the water and males, hundreds of millions of sperm. The eggs hatch into microscopic, free-swimming larvae that look for a place to settle in estuarine and coastal waters. 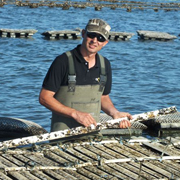 By two or three weeks the larvae develop a transparent shell and retractable foot (used to attach themselves to a suitable hard surface – in CROWN’s case, PVC slats).  At this time the oysters are called “spat”. Once the larva is attached the foot is reabsorbed, the shell darkens, and the small animal takes on the appearance of the adult mollusc. 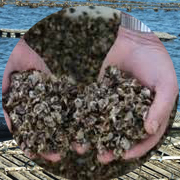 Crown Oysters strip the spat from the catching surface/ slats very soon after settlement when the oysters are still only 3 to 10mm to prevent oysters becoming misshapen or clumped together. 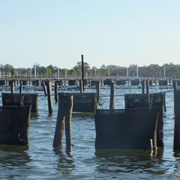 The spat are then placed in plastic mesh cylinders or baskets. This method provides excellent protection from predators such as fish or crabs. When the oysters have tripled their size in around 3 months they will return to the land base to be graded. 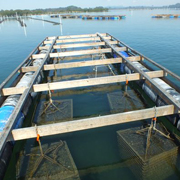 During their growing cycle our oysters will be graded between 6 to 8 times and returned to the river grouped by their size. Depending on the specific stage of the oyster, they are either placed in trays, stacked into a module, and hung from the pontoons in deep water……. 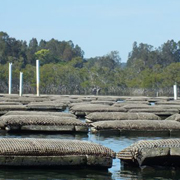 ……..or placed into baskets hanging on “long lines” in more shallow waters. 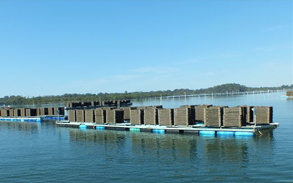 Every 4 weeks all our oysters are dried for 5 to 10 days to prevent extra spat growing on top of the oysters. 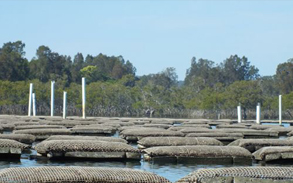 It takes between 3 to 4 years for Sydney Rock Oysters to reach maturity, weighing between 35 to 60 grams 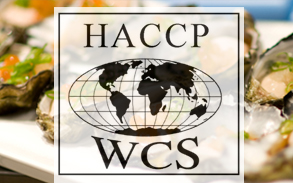 Stringent laboratory testing of both oysters and our farming waters follow the strict guidelines of the food safety regulations of the HACCP.